No Small Change required in education

This week saw the report of the Scottish Parliament Economy, Jobs and Fair Work Committee inquiry into the gender pay gap. The report No Small Change: The economic potential of closing the pay gap makes 45 recommendations, to Scottish Government, its agencies, and employers, that aim to tackle women’s inequality at work.

An important factor is the recognition by the Committee that the pay gap is a complex and systemic problem, and tackling it requires actions from a range of stakeholders across childcare, procurement, business support, economic development policy and delivery, education and skills. We have enthusiastically welcomed the recommendation that Scottish Government develop a national strategy, the key ask from Close the Gap and Engender.

So what does this mean for education policy, for our schools and teachers, and for children and young people?

The Committee’s core recommendation on education states that “a gendered analysis of education is key to tackling the gender pay gap”. The Committee was clear that changes are needed in the education system, and is going to write to the Scottish Parliament Education and Skills Committee with their findings and ask them to consider the issue further in their future work. The Education and Skills Committee has not previously undertaken specific work on equalities, therefore this is a welcome step.

In order that meaningful change can take place it’s important that education policymakers, and teaching and career professionals, understand the link between the gender pay gap and girls’ and boy’s experiences of education.

Occupational segregation, where women and men are clustered into different types and levels of work, is a key cause of the gender pay gap, and a cradle to labour market issue. From the day children are born they are categorised by pink and blue baby clothes. As they get older and learn through play, girls’ and boys’ education journey is already being shaped by whether they are given dolls and kitchen sets, or trains and building blocks.

As they move into formal education girls and boys and young men and young women are funnelled into different subjects based on stereotypes and gendered assumptions about their capabilities and interests. This in turn leads to further divergence in subjects studied in college, university or training, and finally to occupational segregation in the labour market.

The acutely gendered roles we see as a result of this mean that unless we disrupt the cycle the next generation of children will grow up surrounded and influenced by the same gender stereotypes we see today. This is why the Committee’s recommendation of a gendered analysis of education is so important.

Currently, the education policy landscape is fragmented. There are a number of policies which require action on gender equality, primarily the public sector equality duty, and the Developing the Young Workforce strategy.

Developing the Young Workforce (DYW), the youth employment strategy, has clear recommendations on tackling gender stereotyping and gender segregation, however there has been an inconsistent approach in the adoption of recommendations with some regional DYW groups prioritising non-equalities actions, and not implementing those which relate to gender.

The Career Education Standard and Work Placement Standard which were developed by Education Scotland to support the delivery of the DYW strategy, set out standards for teaching and careers professionals, along with parents, employers and Skills Development Scotland, on learning about work and careers. Gender is only referenced once in these policies, with a generic commitment to promoting equality of opportunity. Without the inclusion of specific and measurable actions to address gender inequality these standards will fail to address gender segregation.

The work of the Scottish Attainment Challenge has also failed to consider gender. This work seeks to address the attainment gap between pupils from the richest and poorest backgrounds, but this fails to take account of a range of gendered issues including gender segregation in subject choice; sexist and sexualised bullying in the classroom, and sexist teaching practices; masculinity and its inter-relationship with classroom behaviour and attitude towards learning; violence against women and girls, including the commercial sexual exploitation of girls at risk of poverty; and abortion and reproductive healthcare as poorer girls and young women have the least access to these services.

Work to break the cycle of poverty, and to ensure that young people born into the poorest households can expect to achieve on the same levels as those born into the richest, is essential. It is also essential that we acknowledge that the type of work which young men from low-income households enter into will be higher paid and higher valued than the type of work entered into by their female counterparts, regardless of their attainment level. Without a gender analysis of the impact of the attainment gap there is a very real risk that the most vulnerable girls and young women will be left behind.

The recent announcement of the decentralisation of power to Head Teachers creates further challenges around accountability, as individual schools will have responsibility for delivery work on attainment without gender competence.

Furthermore, there has been no equality impact assessment undertaken for either the DYW Strategy, or the Scottish Attainment Challenge work, despite this being a requirement of the public sector equality duty, and a critical mechanism to understand the differential impact of policy on women and men.

If taking action to address gender inequality is seen as an option, and not a requirement, then future generations of girls and young women will face the same inequality which characterises our present society. Education policy must have a gender analysis, and an across the board commitment to tackle gender inequality, if we are to see real change.

Our Be What You Want campaign aims to address occupational segregation, and therefore the gender pay gap, by working with education policymakers, practitioners, and young people to build an understanding of gender stereotyping, and encourage non-traditional subject choices.

We offer free resources and can deliver CPD sessions for teaching practitioners, and classroom sessions for pupils, on gender stereotyping and occupational segregation, and how young people can keep their options open by challenging it. We hope that tackling gender segregation in subject choice will lead to reduced occupational segregation in the labour market, a closing of the gender pay gap, and a reduction in gender inequality.

Children and young people learn in school that if they work hard and study they will improve their chances of getting a good job. Girls outperform boys across the education and skills pipeline, yet when they reach the labour market the tables are turned and they find their skills and hard work are not rewarded in the same way as their male counterparts.

It’s time to break the cycle. It’s time to close the gender pay gap, and to enable young women to enter employment with the knowledge that they will be treated fairly. 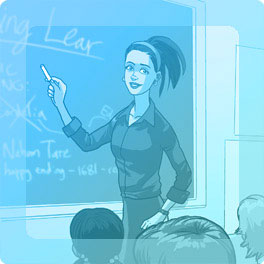